Information
This is our News site and press centre for Maidstone Borough Council.
HomeNews2019JunePark and Ride follows in Iggy’s footsteps 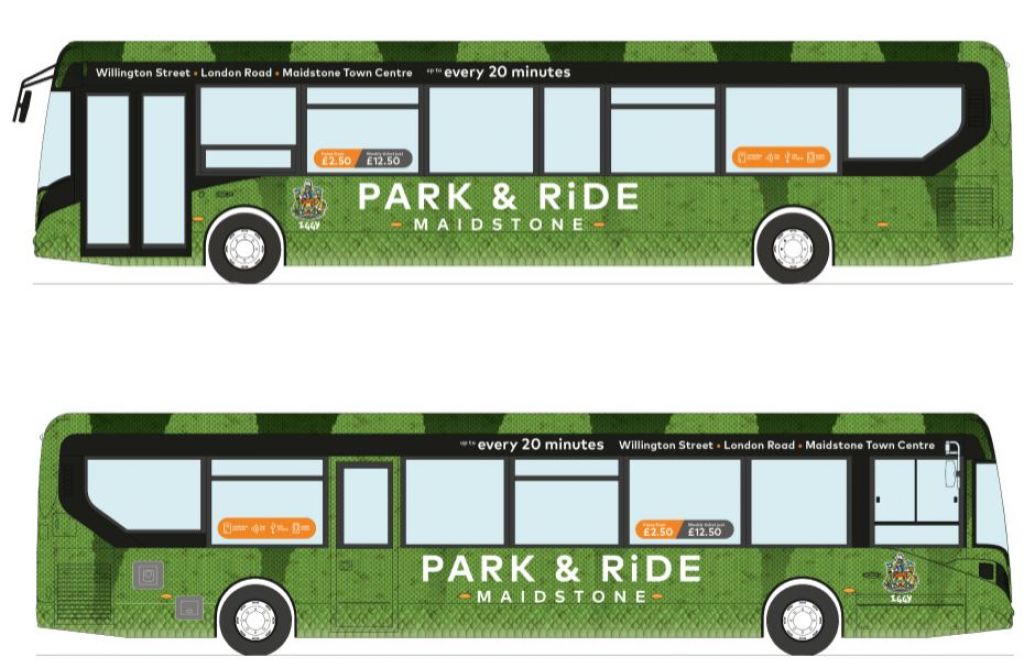 Maidstone Borough Council officially hands over the running of Maidstone Park and Ride service to Arriva on 1 July with a pre-launch event on 27 June 10am to 12 noon, Jubilee Square.

As part of the six-year contract Arriva have committed to providing both peak and off-peak services, revert to a ‘pay to ride’ service and upgrade their vehicles to EUR0 6 buses.

The three buses will be called Iggy, Steggy and Spike in tribute to the discovery of ‘Iggy’ the dinosaur, whose fossilised skeleton was unearthed in 1834 in the Queens’ Road area of Maidstone. One of the most significant dinosaur discoveries of the Victorian period. Not only one of Maidstone’s most famous residents, the bones enabled palaeontologists to figure out the anatomy of the mighty Iguanadon.

The new green dinosaur bus designs will also incorporate the Maidstone coat of arms which has the only coat of arms in the world to feature a dinosaur. The event will have one of the newly designed buses on display in Jubilee Square in the town centre.

“We have worked very closely with Arriva to make sure the popular Park and Ride services continue to the same high standard we have come to expect.”

As part of the arrangement Arriva will have the exclusive use of two car parks located at the current Park & Ride locations - Willington Street and London Road which will be free of charge to users."

For more information and to view timetables please visit the Arriva Website.

“From 1 July, Arriva will be running the Maidstone Park & Ride service. This is an essential service helping connect people to the town centre whilst supporting local businesses.

To mark the launch, we have designed a new, branded livery on our buses in a reptile print, which symbolises Maidstone’s coat of arms; the only one in the world with an Iguanodon dinosaur visible on the crest. ‘Iggy’ the Iguanadon was excavated in 1834 in the Queens Road area of Maidstone.

We invite stakeholders and customers to come down to our event at Jubilee Square on 27 June to find out more about the launch and the story behind our new design.  Arriva are proud to be offering this public service and we look forward to serving customers with a frequent, punctual and reliable bus service.”

Linking with the dinosaur theme Maidstone Museum is currently hosting the Endangered and Extinct Exhibition until Sunday 1 September as its 2019 Summer Blockbuster event. The exhibition focuses on the reasons for extinction and how species are disappearing at an alarming rate. Anyone presenting a park and ride ticket at the museum will be offered a 20% discount off museum merchandise.

The Endangered and Extinct Exhibition event includes activities in the museum galleries, dress-up selfie spots, quizzes to follow, a climate change trail and the chance to create your own origami endangered animal.